Spring time for morel hunting enthusiasts is often described in many ways, and often can be summarized as a ritual. The rebirth of nature as it wakes from the winter freeze brings the coming of the ever-elusive great morel mushroom. While most morel hunters only set out to forage this prize mushroom, there are many other wild edible plants that others seek to forage and harvest along with the morel.

As with morels, other edible plants need to be properly identified…

Before we get started, The Great Morel would like to emphasize the importance of plant identification. As with morels, other edible plants need to be properly identified. There are a great many resources out there such as Wild Edible  – where you can find additional information. You can also get in contact with your state’s DNR and other local foraging experts in your area.
Eric Orr [1] of Wild Edible has been kind enough to offer his expertise and insight. Eric heads up one of the Internet’s best foraging web sites and his knowledge on the subject is as good as it gets. With much thanks and gratitude, Eric will help The Great Morel highlight a few of the more common edibles found while wandering through the woods. (Note: keep in mind some may not be native to your neck of the woods.) 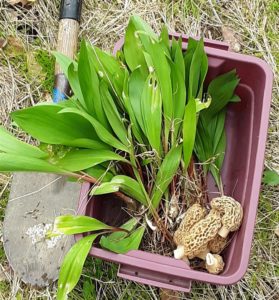 When one thinks of foraging morels, they often think of ramps (Allium tricoccum), or wild leeks. Both ramps and morels have a very short season and both share some of the same habitat. 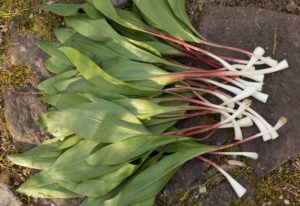 Look for ramps in rich, well-drained humus underneath dense hardwood canopy. They tend to prefer cooler north-facing slopes.Ramps are easily identified by their one to three leaves that measure 1 to 2.5 inches wide by 4 to 12 inches long. The leaves only last from April to mid-May before warmer temperatures make them die back and disappear.
Don’t confuse ramps with toxic look-a-likes such as Lily of the Valley or the less-similar False Hellebore. If the leaves smell of onion or garlic, they’re ramps. Ramp bulbs are popular but many prefer the leaves. To harvest sustain-ably, pick only one leaf from plants that have at least two leaves or cut the bulbs at the roots, leaving the roots in the soil to continue growing. Use ramps as you would onions or garlic. They’re best cooked and go great with morels! For another good food article on ramps check out WideOpenEats.com where they highlight ‘everything you need to know about ramps‘ and see how you can use ramps in the kitchen.

Dandelions (Taraxacum genus) are probably one of the more well-known wild greens that are readily available during morel season. Eric adds, “When I picked morels under apple trees in my yard a few days ago, there were also tons of dandelions blooming.” This common edible plant grows in most regions of the United States and can be easily spotted by its bright yellow flower. 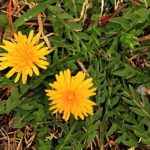 There are several plants that resemble dandelion but here are some traits to look for in order to make a positive ID:
While you can eat the youngest, tenderest leaves raw, dandelion leaves tend to get bitter as they age and are usually better cooked. One Eric’s favorite ways to eat dandelion greens is wilted in bacon grease. Also check out GrowForageCookFerment.com for the article on 50+ Dandelion Recipes: Drinks, Sweets, Soap, Remedies + More

Like dandelions, Common violets (Viola sororia), or Common blue violets, appear frequently in yards and other open areas where morels might occur. The common violet is another edible plant that is easily spotted and you can forage and harvest while hunting morels. 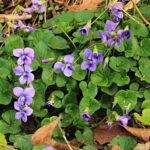 The distinctive five-petaled flowers are usually blue-purple but can also be blue to white fading to yellow. They’re easy to spot against the green of grass. Common violet leaves have rounded teeth and can be up to around 2 inches long and wide. They’re heart-shaped — the lower leaves are more rounded while the upper leaves are more pointed.

The younger leaves are great raw in salads or sandwiches and are excellent steamed. Like spinach, though, it’s easy to overcook violet leaves down to nothing.

The flowers are slightly sweet and are great candied with powdered sugar and egg whites.

Hairy Bittercress (Cardamine hirsuta) is a common weed that occurs in cooler weather and disappears as temperatures rise in late Spring or Summer. It loves damp, disturbed soil and really thrives in wetter areas. 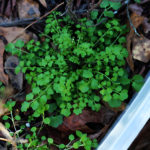 Bittercress grows in a basal rosette with leaves around six inches long that consist of rounded pinnate leaflets along the stalk and a single leaflet on the end.

The small white flowers are about 2mm across and grow on a single flower stalk from the middle of the rosette.

As a member of the mustard family, Hairy bittercress adds a pleasant peppery bite to salads. I think it’s best eaten raw but it can be used as a cooked green, as well. It’s one of the milder mustards.

Stinging nettle (Urtica dioica) is an invasive European plant that is naturalized throughout most of the United States. It’s commonly found around old homesteads where you might also find morels. 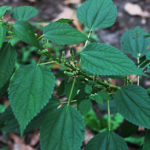 Nettle leaves are shaped like long, narrow, coarsely serrated lances or hearts. They can grow as long as 4.5 inches or so by 1.5 inches wide, arranged oppositely on the stem. The sting of stinging nettle is caused by tiny hypodermic hairs on the stalks and the undersides of leaves. Wear thick gloves and long sleeves when harvesting to avoid getting stung.
Pick only the younger, more tender leaves, just as you would pick greens for a salad. And don’t pick nettles after they develop flowers in late Spring, as they could contain kidney-damaging alkaloids. Nettles make good cooked or stir-fried greens as well as a healthful tea, but you don’t want to eat them raw. Cooking or drying the leaves will remove the sting.

There you have it…

For the seasoned morel hunter who has tromped through the woods for years, you’ve certainly crossed the paths of many of these wild edible plants. There are many other edible plants such as fiddleheads, field garlic, chickweed, wild asparagus and wintercress; all of which can also be found in the spring right along with the morels.

Here are a few additional links to sites about foraging edibles that are worthy of checking out:

Eat The Weeds  (One of Eric’s favorite foraging sites)

Honest Food is a great site for cooking wild foods

You’ve just successfully completed The Great Morel’s Foraging 101 of some of the more common sought after edibles to compliment your morels. Again, The Great Morel cautions you to be certain with whatever you foraged – identification is key with morels, as it is with the plants listed in the article. If you are not certain – Do Not Ingest! 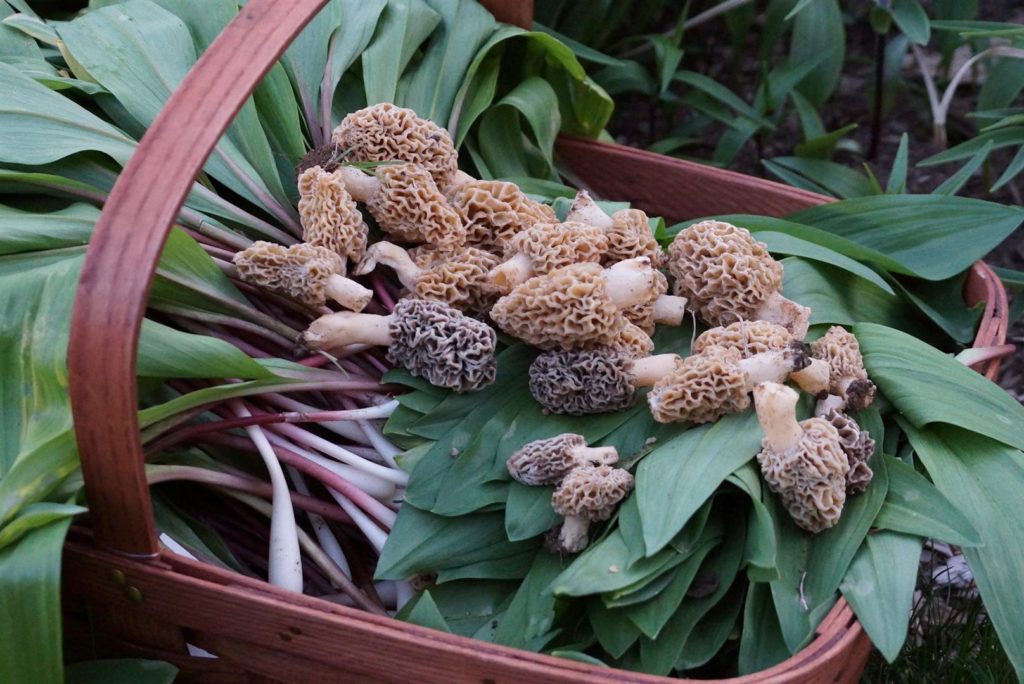 1. Contributing guest writer Eric Orr, is the founder of  Wild Edible  – a site about foraging for wild food and medicinal plants and herbs, and it’s about locally and sustainable grown veggies, as well as humanely raised meat, and how they all mesh together to nourish and sustain our bodies and souls. 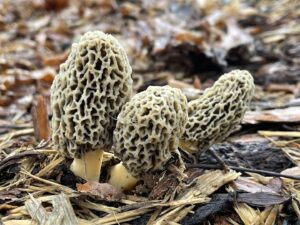 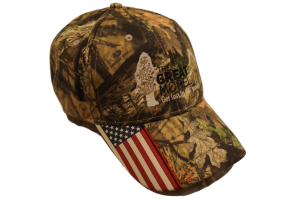 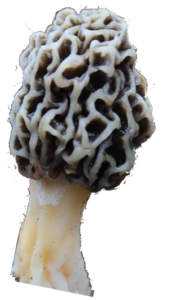 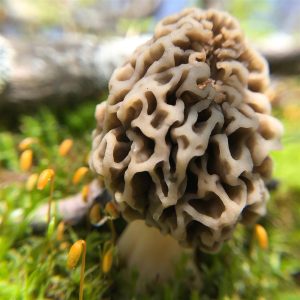 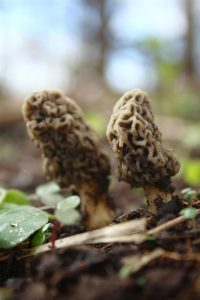 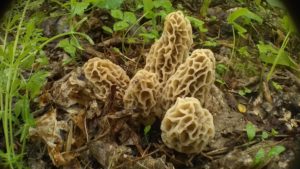 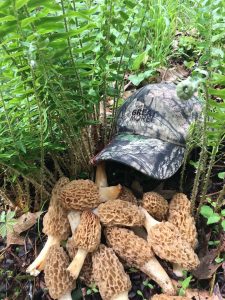 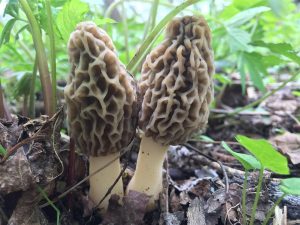 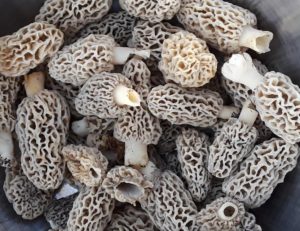 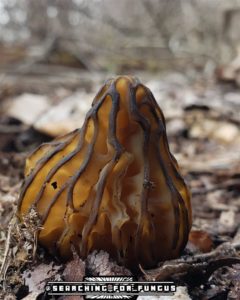